Can CBD or THC Lube Improve Your Libido? – Marijuana Doctors

Can CBD or THC Lube Improve Your Libido? 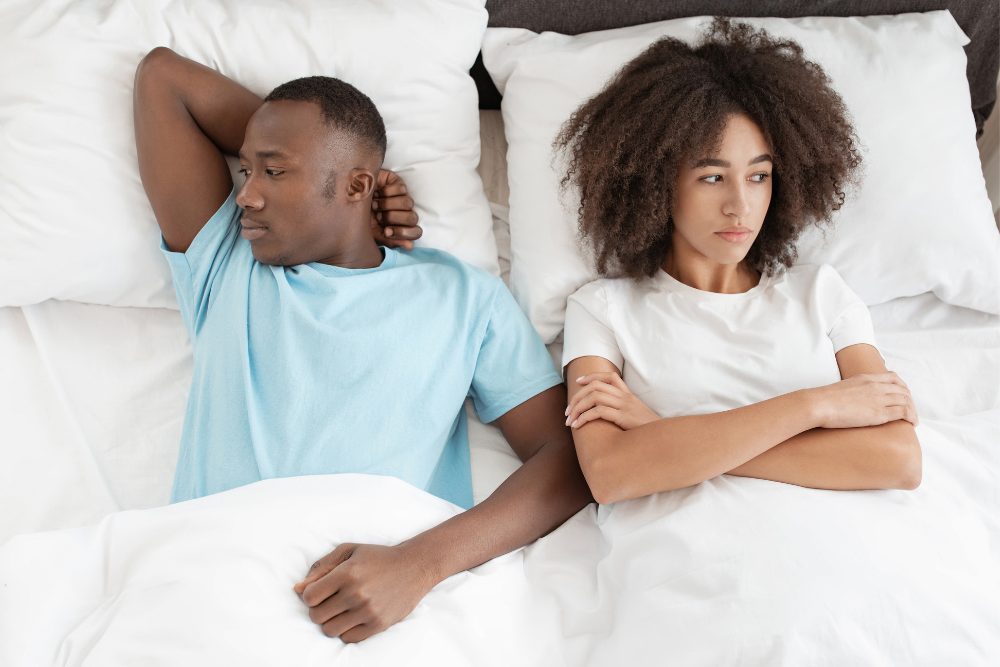 When it comes to physical attraction and sex, libido is a highly underrated topic. It can be the source of insecurities and issues in the bedroom. It’s often assumed that appearance and personality are the primary influences in relationships, body image, and confidence, but many people secretly suffer from low or poor libido (sex drive). A good portion of them don’t realize it.

Not everyone has a high or “normal” sex drive or libido. Many individuals living with low libido are unsure what to do about it. While there’s no shortage of natural, manufactured, and prescription sex enhancement and libido boosting products to try, personal experimentation is often necessary to determine efficacy and satisfaction.

Over time, the process of trial and error can become quite expensive and add to the stress of trying to find something that works to boost declining or low libido/sex drive. Fortunately, cannabis, arguably, nature’s most potent plant that has been used for years in Ayurvedic medicine as an aphrodisiac¹, can reportedly turn up the heat in the bedroom.

Cannabis has quite the reputation for its pain and stress relieving properties. It also has a notorious reputation for adverse effects in general. Many of them are associated with misconceptions about marijuana. CBD and THC are natural and support many of the body’s normal functions, including sexual health, reproductive function, and sexual desire. Let’s dive into the science behind the effects of CBD and THC lube on libido.

A common contributor to low self-esteem is libido. Not everyone experiences low sex drive or trouble with sexual performance, but the silent majority of people do. Contrary to popular belief, men are not the only ones who experience challenges with physical desire and in the bedroom.

Low libido is an issue that affects women just as much as men. It’s just less talked about. If you struggle with physical intimacy due to low libido or sex drive, cannabis and CBD may be the perfect solution to revive your engine and reignite the sparks in the bedroom.

Traditionally, cannabis use has long been associated with decreased sexual desire. Until recently, there was little scientific evidence to support this claim. Some studies suggest marijuana has a dampening effect on libido, and then there are those that suggest otherwise. To help separate the truth from fiction, let’s look at what scientific and medical research has to say about cannabis and sex drive.

Sex drive is a very complex topic because many factors can affect it. Even seemingly unrelated activities and external factors, such as sleep, diet, pain, depression, and anxiety can dampen one’s desire or alter their ability to react or perform as expected when the time or mood is right.

Marijuana reportedly can improve or decrease libido, but the desired effects are dependent on several things, primarily cannabis strain and type. Though cannabis, in the right amounts, can help improve libido and, in some cases, sexual performance, there are potential downsides to consider.

Marijuana has cannabinoids that influence various physical, physiological, and mental systemic responses in the human body. Of particular interest are how cannabinoids interact with the male and female reproductive organs and sex hormones.

Aside from playing a vital role in muscle and overall growth and development, consistent sex hormone levels are necessary for emotions and sex drive, and sexual performance. Aging, health issues, environmental concerns, and lifestyle behaviors can lead to premature or extreme declines in sex hormone production that interfere with the male libido.

Like most systems in the body, balance or homeostasis is necessary for proper function. Because the cannabis sativa plant contains cannabinoids that modulate the male reproductive system, high amounts can disrupt system homeostasis and negatively impact male fertility and reproductive health. Cannabis in moderation is suggested for males² and can provide some health benefits.

The female reproductive system also contains ECS cells in the ovaries. In women, marijuana cannabinoids trigger the release of exogenous cannabinoids that help regulate practically every stage of the ovarian cycle, from folliculogenesis and ovarian endocrine secretion to uterine decidualization and placentation, and influence sex hormones that control this process.

Factors That Affect Male and Female Sex Drive and Libido

Scientific evidence shows that the key to spicing things up in the bedroom includes controlling health-related and emotional issues that indirectly influence sex drive. There’s also the consideration that aging causes sex drive to decline naturally. Pain, high-stress levels, hormone imbalances, and certain medications are among the most widespread mood killers.

Libido is a characteristic that varies per individual and fluctuates naturally. Other factors include relationships, sleep, personal habits, mental health, and hormone imbalances. Fortunately, marijuana has cannabinoids that can counteract these concerns and help improve libido.

Anxiety is a common cause of low libido in both men and women. Sex-related anxiety manifests differently among those affected and can occur at any time. For some, sexual desire remains low despite stimulation or activity. It is commonly associated with disinterest, difficulties with arousal, natural female lubrication, male erection and ejaculation issues, and failure to climax or orgasm.

For others, stress and worries about sex commonly lead to sexual performance anxiety, making it difficult to have good sexual experiences. Sometimes, anxiety regarding intimacy or sex is severe and not so easily overcome with behavioral adjustments, conventional medications, or therapies. People who experience fear and anxiety when in intimate settings or situations suffer from a condition known as genophobia” or “erotophobia⁴.

Hormones have an impact on sexual thoughts, interests, and performance. Though many factors can cause one’s sex drive to languish, hormone changes are common and often disrupt more than libido. Hormone irregularities vary among individuals but can also affect other libido factors, such as sleep, appetite, moods, etc.

Hormone deficiencies are a significant cause of low libido in both men and women. For women, natural sex drive declines are common during middle age when perimenopause, menopause, and andropause typically occur. This often occurs between the ages of 40 and 55.

As estrogen, progesterone, and testosterone production permanently change, women usually notice a decrease in sex drive and energy levels and an increase in mood disorders. Health conditions like pregnancy or medical procedures, such as hysterectomies, contribute to hormone imbalances that affect sex drive. In men, hormone fluctuations and deficiencies tend to lower sexual pleasure response, cause performance issues, and decrease muscle mass.

Stress is an immediate libido dampener. The effects of stress on the body and its functions are well documented. Cortisol, the stress hormone combined with additional libido killers, can make it difficult for both men and women to mentally and physically engage in sexual activity. Stress commonly occurs with anxiety. CBD products have anxiolytic benefits that help reduce the stress response and can be helpful as a mood stabilizer and libido booster.

Erectile dysfunction is a common side effect of low libido for men and a significant source of stress, performance anxiety, and poor confidence. While it’s normal for men to occasionally experience difficulty with erections when sexually excited, when that problem occurs more frequently, it is indicative of a potential physical or psychological problem or medical condition: erectile dysfunction (ED). ED is often resolvable with the right medications, therapies, or assistive devices. Medical cannabis has properties that boost blood circulation to counteract the effects of ED.

Marijuana is known for its anti-anxiety and mood-enhancement properties. Studies show that THC, the psychoactive substance in cannabis, enhances mood and alleviates negative thoughts that may occur from sexual tension and pressure. However, it has a potential dampening effect on libido for some males that can interfere with the physical responses necessary for normal sexual performance.

On the other hand, CBD is non-psychotomimetic and has high efficacy for anxiety disorders, including those involving sex and libido. A recent study on the effects of CBD on anxiety suggests that 300-600 milligram doses of CBD⁵ significantly reduce anxiety symptoms. Of course, this is one of many scientific and medical studies that indicate CBD has positive and therapeutic impacts on anxiety and common mood disorders, which could be extremely helpful in managing sexual concerns.

However, when evaluating the results of numerous studies, both cannabinoids have therapeutic effects that make the pain less noticeable and reduce inflammatory activity when applied topically or consumed via food, vaping, or smoking. 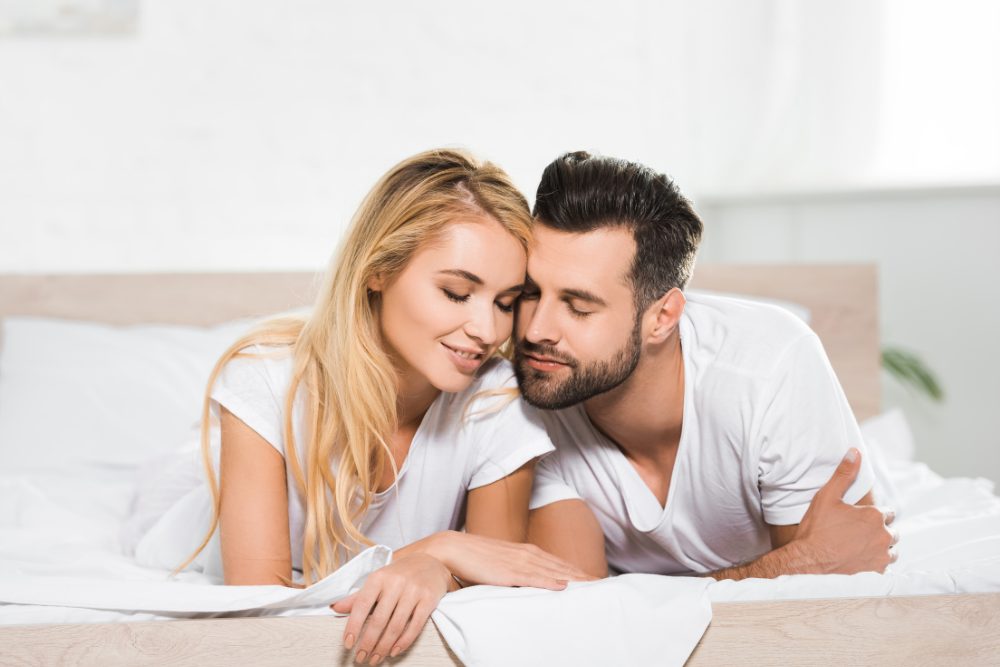 Benefits of CBD and THC Lube for Libido

CBD alleviates many of the adverse effects of hormonal irregularities, such as stress, anxiety, poor sleep, and reportedly, physical attraction and sexual desire. Currently, there’s limited clinical evidence on THC and CBD as lubricants. However, many people rely on cannabidiol-containing products, such as CBD and THC lubes and suppositories, to boost their libido and sexual interactions.

Increases Lubrication – Those struggling with pain and discomfort during sexual activity due to dryness may benefit from cannabis-infused sexual lubricants, especially CBD varieties. For some women, vaginal dryness makes it difficult to enjoy sexual activity, especially if accompanied by pain.

Painful sex that occurs frequently is often of physical or health origin and is more commonly experienced by middle-aged or menopausal women. It’s estimated that dyspareunia affects up to 18 percent of adult females⁶ and causes physical and emotional distress that impacts body confidence, libido, relationships, and overall quality of life.

Applying CBD to the genitalia can help improve feelings of sexual arousal, making it easier for women to climax and orgasm and men to perform better during sex. CBD reduces inflammation, promotes muscle relaxation, alleviates discomfort, and increases pleasurable sensations and libido. This suggests that CBD-infused lubricants can also increase natural “wetness” in women and “stiffness” in men to improve sexual arousal and make sexual activity more pleasurable.

How to Use Cannabis Lube to Boost Libido and Sexual Performance

When choosing lubricants for sexual experiences involving toys and condoms, don’t forget to consider their material. Water-based lubricants are among the safest and most recommended, especially for individuals with chemical or latex allergies. However, the best lubricant type is the one that is compatible with your personal preference. Also, there are many CBD- and THC-rich cannabis strains, each with different effects.

Despite topical application to the vagina or penis being the optimal administration method for the marijuana plant’s libido and sexual benefits, many people report positive libido effects from eating, smoking, and vaping marijuana and cannabis-infused suppositories.

To use cannabis lube safely, try the following administration techniques:

Alternative ways to use marijuana for libido support include edibles, topicals, extracts, and smoking. Using a consumption form that works best with your situation is vital. Not everyone uses cannabis for lubrication; many rely on it because it alleviates health issues and symptoms that make it difficult to focus on or enjoy intimate encounters. Its reported positive effects on libido and sexual function are also perks. 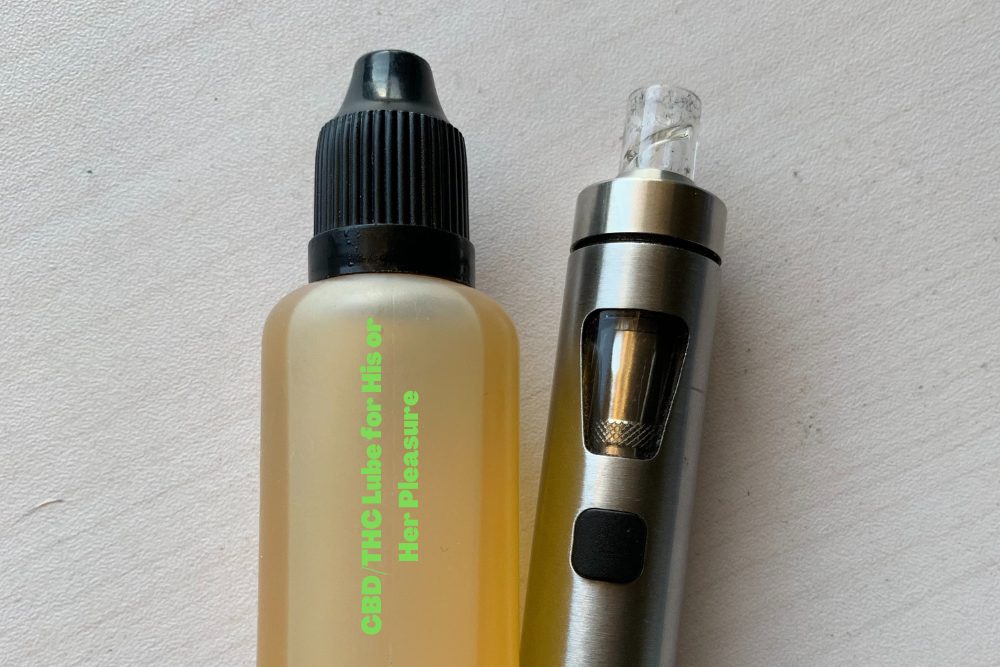 Cannabis Lube Can Help You Get Your Groove Back

Can CBD or THC lube improve your libido? The verdict is in! Many individuals happily rely on cannabis-infused lubricants to boost sexual stamina, response, and performance. Despite negative associations and connotations about the cannabis sativa plant, increasing evidence suggests that lower stress levels and specific cannabinoid interactions with receptors in the endocannabinoid system of the brain and reproductive organs play vital roles in boosting sexual response.

Anyone experiencing unusual, unpleasant reactions or sensations, low sexual interest, or performance issues during intimate situations should see a medical doctor to rule out diseases and common disorders that are resolvable with treatment. In many cases, treating the cause can help restore libido. CBD and THC lubricants are also beneficial and can help improve sexual desire and low libido.

How Abortion Medications Differ from ‘Plan B’ and Other Emergency Contraceptives

New York steps up on abortion, guns to provide lesson for national Democrats