Cannabis Sales in Colorado Have Fallen for 11 Straight Months YoY, Should We Be Concerned, Yet? 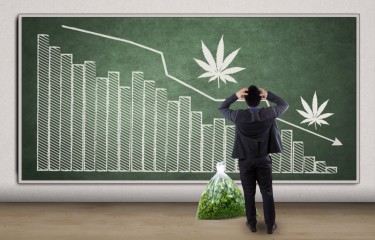 Cannabis Sales Falling in Colorado, should we be concerned?

There’s an alarming trend happening in Colorado and we should all be paying attention. For the most part, the cannabis industry has been the outlier in the global market place as it continued to grow in size and revenue during the pandemic. Is the cananbis market getting saturated, already?

Where other businesses were crushed under the global stagnation the cannabis industry kept on seeing more revenue come in, creating new markets, and seemingly being integrated on a global scale.

However, the world has been in a state of pseudo-lockdown for the past two and a half years and we’re now beginning to see the fruits of that action. Some might claim that these lock downs were necessary due to the Covid-19 Pandemic. Considering that almost 3-years in, there have been 6.3 million fatalities globally (as of writing this article) out of a global population of 7.9 billion people (and counting)

While the loss of life due to the virus has been significant when you look at it from the individual perspective. People lost family members and friends to the virus, and their loss should never be diminished. Yet simultaneously society needs to evaluate the macro effects of current social restrictions that the world is enduring.

Statistically speaking, the total deaths of Covid has claimed the lives of 0.0797% of the world’s population with the median age of death ranging from 73-years and older depending on the population data you’re looking at.

The reason why looking at the problem from this perspective is important is because as society remains in a state of uncertainty, where a lockdown or a mandate could impede free moving commerce – every institution and business is bleeding money.

Couple this with high inflation and a devaluation of the currency, you will begin to see the economic impacts take toll in all sectors of society.

Perhaps even cannabis is no longer inoculated against this type of economic turmoil as Colorado’s latest financial statements on the industry showed.

Colorado dispensaries broke marijuana sales records in 2021, bringing in over $2.2 billion. Sales volume and wholesale marijuana prices began falling last summer, however. April 2022 was the eleventh straight month of falling dispensary sales on a year-over-year basis, while the price of wholesale marijuana flower fell over 46 percent on average from January 2021 to April of this year, according to the state Marijuana Enforcement Division. – SOURCE

The article also outlined how dispensary owners saw up to 20% drop on their sales on 420, compared to their previous year earnings. But what could be the reason behind this? Is this a part of the pandemic’s relentless toil on consumers that now they have to choose between essentials like food over products such as cannabis, or could there be another reason?

“The bigger they are, the harder they fall,” says John Fritzel, owner of Buddy Boy, a chain of dispensaries in Denver Colorado. “When you’ve got that kind of overhead, you just can’t keep that going. We would love to, but there’s not enough capital in this market. If there was a ray of light and the numbers were improving, we would have tried.” – Source

In another Westword.com article, this time talking about the closure of a chain of dispensaries, the article points out that Fritzel believes that the decline came from a new law that went into effect on January 1st.

This law limited the purchasing amount daily allotted to consumers to only 8 grams. Previously medical marijuana patients could purchase up to 40 grams per day. In the case of Buddy Boy, this was 90% of his revenue stream.

During the first four months of 2022, the Colorado industry didn’t even break a $100 million in revenue, which was 43% worse than the year before. However, there was a general trend in reductions over all sectors of the cannabis industry, from wholesale prices and consumer demand.

“With the new regulations at the first year cutting daily allowable concentrate limits by 80 percent, as well as all of the inflationary conditions and overall market retraction, it was just too much,” Fritzel notes. – WestWord

From a consumer perspective, if the state limits the available amount of concentrate – you simply would turn to the streets. Cannabis isn’t like other products where the state has a monopoly on production. Rather, it’s a decentralized crop and anyone with a bucket, dirt and water can grow it.

Therefore, when the state creates restrictions in consumer options they force the consumer to the black market. However, Fritzel also believes said;

“There are going to be hundreds of [marijuana businesses] gone. They’re already closing. The industry as a whole, unless you’re in a limited license market, is really struggling,” he notes. “The novelty is wearing off.”

This is also an important detail to observe. Colorado has been actively selling cannabis recreationally for 10 years now. The novelty has worn off. Cannabis is simply “something you do”, which means that the consumer has caught up to the industry.

They now hold the purchasing power because the market has saturated to the point where there are “plenty of options”. This means that the businesses with the deepest pockets will be able to survive at the lowest price point.

Buddy Boy, unfortunately, didn’t have the deep pockets of Wall Street backed businesses. And as people invest into the market place, they provide a different level of service, usually at a competitive price point.

Unless you limit licensing or create mechanisms and tax deductions for local businesses – the money machine will gobble up the market as it does everywhere. Yet even Fritzel alludes to the introduction of this article…the global economy has gotten more expensive.

When you take a reduction in wholesale prices, coupled with over saturation in a marketplace, then turn up the heat with hyperinflation due to global geopolitical policy – you’ve got the perfect recipe for mass foreclosure.

Thomas Mitchell, the author of the article in Westword concludes;

Dispensary takeovers have occurred at a high rate over the last two years, but permanent closures were rare in Denver until recently. Mile High Green Cross, a Capitol Hill dispensary under the Pure Greens ownership group, was closed in May to make room for another Pure Greens-owned store, La Conte’s, in the same neighborhood. A month before that, Colorado dispensary chain Bonfire Cannabis closed its medical marijuana dispensary in Denver after the company couldn’t secure a recreational sales license.

Which leaves us with a bitter taste in the mouth.

The calm after the storm…

When you’re going through intense moments in life, or in this case as a global society – much of what we know will go the way of the dodo. However, this is only because there is a major shift occurring within the whole fabric of society – from our spiritual affiliations to how we make our money. If you’re reading this article and think, “Man, we’re so screwed!” you’re right!

I personally believe that the world will probably get a little darker before the light comes. However, it’s in times like these where community is important. It is one of the greatest strengths of humanity. However, we are being forced to isolate and hide ourselves behind loose-fitting cloth masks pretending that it can protect us from an invisible threat.


While it’s noble to wish to accommodate the whole world to cater to the most vulnerable – at one point we’re going to have to weigh out the cost/risk benefit to society by attempting to protect the 1% at the expense of the 99%.

The cannabis industry readjustment in Colorado cannot be entirely blamed on the pandemic. However, the rising cost of living is forcing business owners to cut back, and that typically means letting go of hundreds or even thousands of employees.

Employees that would be relying on government money to get another job…in a market that is unloading employees. As the cycle continues and if we’re not very careful – could be a recipe for disaster.

Only by coming together can we weather the coming storm, and once we’re through it and the dust settles…we’ll be living a complete new dynamics. How good or how bad is entirely up to us. 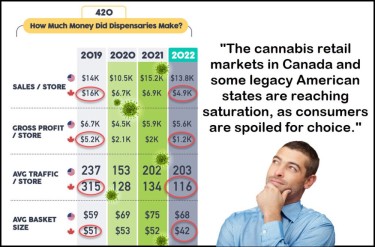 CANNABIS MARKET SATURATION, ARE WE ACTUALLY THERE NOW?

Galaxies, Clusters, and more (oh my)