How ‘Eat This, Not That’ Helps Spread Cannabis Misinformation to Millions of Newsfeeds 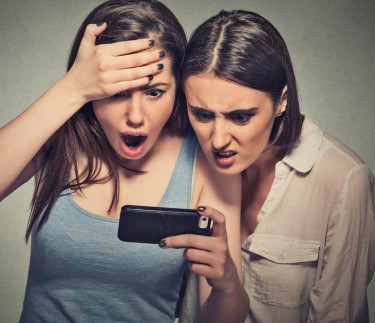 As I research all things cannabis, I frequently come across health websites writing about cannabis. For the most part, I skim these sites to see if there’s anything worthwhile. The vast majority of health sites take a neutral approach to cannabis, pointing out “some potential” risks for some people, but for the most part they keep a pretty decent view on cannabis.

For a while now I’ve been seeing a site called “Eat this, Not that!” which appeared on my Google Alerts a few time. As I was going through my weekly research I stumbled on an article title that read, “Surprising Side Effects of Marijuana After the age of 50”.

While I’m not 50-years old, I do know of many people who are over 50 and decided to give it a look. The introduction paragraph seemed to be a nuanced and take an neutral approach;

And according to a study published in the International Journal of Drug Policy, marijuana use in people over 65 increased by 75 percent between 2015 and 2018. That said, while marijuana does provide a lot of medicinal benefits, it does affect everyone differently and experts reveal it can cause unexpected side effects. – EatThis.org

But then, shortly after that – it goes full Anslinger with its wild and outlandish claims. As I’ve not done one of these in a while…today I would like to challenge the concepts in this article and point out the obvious bias, the lack of evidence, and the outright lies the article perpetuates.

Talking about misinformation – this will be a master class in why you should not “Eat This” because it’s essentially covered in dog shit!

Chaye McIntosh, Clinical Director, ChoicePoint says, “Aging is a major factor linked to metabolic changes, various morbidities, increased prescription drug usage, and a general loss in functioning. In recent years, the usage of marijuana for recreational and medical purposes among older individuals has expanded dramatically to reduce the visible and non-visible effects of aging.”

This is all it says about this point. It doesn’t explain that because older people typically have a lower endocannabinoid count, a lot of the symptoms of aging disappears due to the new supplementation of phytocannabinoids. Things like inflammation, pain management, mood, appetite, and more -–all things affected as we age – are all in some way affected by cannabis.

Older people are consuming cannabis at higher rates because they suddenly feel good, healthier, and younger as a result.

McIntosh shares, “Long-term cannabis usage causes CHS, which is characterized by severe cyclical nausea and vomiting, as well as epigastric or periumbilical abdomen discomfort. It goes unnoticed due to a lack of awareness. The prevalence rate is around 95% among users.”

This is an outright lie. Firstly, the cause of cannabis hyperemesis syndrome is still not determined. We know that chronic use may lead to it, but it isn’t causal as not everyone gets it. In  fact, the stat of “95% Prevelance” is also a lie since the Cleveland Clinic cites the following;

Only a small portion of people who regularly use cannabis develop CHS. Because CHS is a newly discovered condition, many people may have it and not report it or are misdiagnosed. One study found that up to 6% of people who visited the emergency room for vomiting had CHS. – Cleveland Clinic

In relation to the “cause” they have this to say;

Experts don’t know exactly what causes cannabis hyperemesis syndrome. Some researchers suspect genetics may play a role. Others believe CHS may occur due to overstimulation of your endocannabinoid system (ECS). The ECS is a network of receptors in your body that respond to compounds in cannabis.

According to McIntosh, “Chronic users are at high risk of developing chronic psychosis disorders like schizophrenia. It causes hallucinations and personality disorders in 95% of users.” – EatThis.com

Once again, how is it possible that “hallucinations and personality disorders” are prevalent in 95% of users? There is absolutely no statistical evidence for this claim. While there is no accurate read on how many regular cannabis consumers there are in the US, the rough estimate sits at about 50-60 million regular cannabis users.

As you can see, mathematically, it is impossible that 95% of chronic users have some sort of “personality disorder” as claimed by EatThis.

Once again with the 95% statistic? Where the living hell do they get these stats from? Cannabis may impair certain abilities for a short period of time, but these effects wane pretty quickly. Any chronic user can continue to organize, plan, solve problems, make decisions, remember and control their emotions or behavior without fail.

Now they switch their source to a Chiropractor…

Dr. Steve Hruby, a Doctor of Chiropractic and founder at Kaizen Progressive Health explains, “Marijuana does not provide a pleasant experience for everyone. It can make you feel worried, fearful, terrified, or paranoid. Marijuana use may increase your risk of developing clinical depression or exacerbate the symptoms of any mental illnesses you already have. Scientists aren’t sure why this is. It can make you paranoid or lose contact with reality, causing you to hear or see things that aren’t there in large doses.”

Firstly, I’m no Biologist…but why is a Chiropractic professional talking about mental health? Why didn’t they ask the numerous mental health professionals that support cannabis as a means of dealing with anxiety, stress, and several other factors?

Now, it’s important to point out that at least the Chiropractor had some truth in his statement. “SOME” people do not have a positive reaction to cannabis. However, this is the extreme minority of users. Most people…dare I say…95% of them, have no issues with mental health whatsoever.

“Marijuana might impair your judgment and senses,” says Dr. Hruby. “The effects vary based on the potency of your marijuana, how you consumed it, and how much marijuana you’ve already consumed. It might:

Did they really just say “reduce your inhibition so that you can engage in hazardous sex or take other risks?” Really?

Please show me the studies…I need to read them! In over twenty years of covering cannabis related content, I have never seen a study that states stoners like to get kinky and bone without condoms…never!

Yes, it enhances certain senses, changes perception of time, and may impact some motor function temporarily…but a chronic user would be right as rain within an hour. Secondly, the other “changes” is literally another way of saying – “You’ll get high…”

As their final nail in their own coffin, here’s the last quote;

Dr. Hurby states, “Marijuana increases your heart rate. The heart normally beats 50 to 70 times per minute. After the effects kick in, the heart rate can rise to 70 to 120 beats per minute or higher. The strain, as well as the tar and other compounds in marijuana, may increase your risk of heart attack or stroke. If you’re older or already have cardiac problems, the risk is significantly greater professional, or personal problems.” – EatThis.com

This is true…wow…I can’t believe that they said one true thing. Now while it’s true that cannabis can both, increase and decrease your heartrate…it is also a temporary thing. In the vast majority of the cases it has little affect on people.

More important for this age bracket would have been the effect cannabis has on blood pressure and how it could impact certain medications that people use – but they focused on the heart.

If you do suffer from a heart condition, it’s best to use low THC, high CBD strains…this would not affect your heart as much as a high THC low CBD strain. This is another aspect of the debate completely left out of the conversation.

If you have a heart condition, TALK TO YOUR PHYSICIAN ABOUT CANNABIS.

Now let’s uncover the lies and dissect the misinformation!

As my final response to this misinformed and potentially “disinformed” content piece, I want to point out to my readers just how the mechanisms of mis-dis-mal information looks like.

I’d like to point you to the first key piece of evidence;

As you can see it says, “ETNT HEALT – Expert-Recommended” which makes you feel like this is an “expert opinion”. As I have just proven, that not only is this NOT an expert opinion, it’s actually completely misinformed and it almost seems that it is ideologically motivated.

The second piece of information I’d like to bring your attention to is;

They claim that the article was “Fact Checked” when in reality “Alex Korab” who happens to be the “founder of ETNT Health Channel” on the website you are reading the information from. 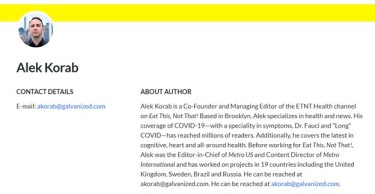 The “Fact Checking” in this case is not from an unbiased source…like me, who completely ripped a new one to this magazine. I don’t ever claim to be a “health expert”, but in all of my writings I attempt to link nuanced perspectives and provide enough evidence for people to make their own decisions.

However, EatThis.com and the ETNT Health Channel is obviously disingenuously trying to portray their expertise on matters of health. My conclusion on their work is that if you read ANYTHING from this publication make sure that you understand that they are IDEOLOGICALLY DRIVEN and serve a PARTICULART NARRATIVE.

EatThis.com is not a site to be trusted and utterly fails as an impartial conveyer of information. I’m just shocked that Google would promote this in their email alerts about Cannabis. This is obviously propaganda serving a particular narrative and is the text-book definition of “misinformation”.

Don’t worry fellow cannabis consumers, as long as I’m around to track down these sites, I will work my hardest to provide nuanced perspectives so that YOU can make up YOUR own mind. Never listen to me for health advice…always run it by with your physicians and trusted sources.