Is Cannabis Good or Bad for the Digestive System?

How Does Cannabis Affect The Digestive System?

Cannabis is known to have varied effects on different people, and this is also true of how the herb affects digestion. There is much more to the interaction between pot and the digestive system than just the “munchies,” which most stoners are familiar with. What you need to know about the digestive effects of cannabis, both good and bad, is provided below.

How cannabis affects the digestive system, on the other hand, is a topic that is getting a lot of attention. Now, although that may factor in, we’re not just talking about the munchies; rather, we’re looking at the bigger picture of how cannabis may affect digestion and other intestinal issues. Read on to know the full details.

The impact of introducing marijuana into the body can be seen through these intricate and precisely crafted receptors. Depending on the person and their response, the outcomes may have both possible positive and negative effects on a user.

Let’s deviate a bit to discuss the production of ghrelin and the breakdown of THC.

Relationship between THC and Ghrelin

Ghrelin is a hormone that is released into the body when we get hungry. It interacts with the vagus nerve in the GI tract before moving to the hypothalamus, a region of the brain that controls these kinds of signals.

It’s interesting to note that research suggests THC may increase ghrelin levels, signaling our brains that we may not actually be hungry (Stromberg, 2014). Of course, this is how the term “the munchies” is defined in a textbook. Therefore, even though you could feel really hungry when smoking, you’re probably not. Additionally, there is a claim that THC heightens our sensitivity to smell and the enjoyment of eating, which may also cause us to sense an increase in appetite (Stromberg, 2014). We can be “tricked” into eating more than we would typically do by these interactions between cannabinoids and the endocannabinoid system.

We currently understand that the ECS definitely has a variety of effects on the digestive tract. It promotes communication between your gut and brain, controls inflammation, and regulates digestion. As with any other area of the body, cannabis appears explicitly to aid with inflammation in the GI system. Another area with a lot of cannabinoid receptors in the digestive system.

Cannabis may affect our digestive system in a number of ways, such as increasing hunger or giving us the munchies. Still, there is evidence that marijuana may also affect some digestive problems. It’s no secret that many cannabis consumers use the drug only for holistic benefits; thus, may we advertise this as another aspect of wellbeing?

A few studies have examined the connection between cannabis and illnesses like inflammatory bowel disease (IBD), including Crohn’s disease and ulcerative colitis; however, formal research into how cannabis may affect digestive conditions is still in its infancy.

A 2011 study headed by Naftali examined the severity of the disease before and after cannabis use in 30 people with Crohn’s disease. Although this is a single study, the findings are encouraging. Through its anti-inflammatory properties, medical cannabis for IBD has been shown to alleviate some of the condition’s symptoms. Some of these issues that medicinal marijuana may alleviate include nausea and vomiting brought on by chemotherapy or cancer treatment, as a weight loss therapy for AIDS-related, weight loss or anorexia, Constipation and cramping, diarrhea, and acid reflux.

Side effects of Cannabis on the digestive System

Cannabis appears to have the ability to improve digestion; however, it does have drawbacks and can have both immediate and long-term negative impacts in this area. Cannabis use may not be suitable for everyone, especially when coping with digestive disorders, even while they are not severe or life-threatening.

As previously discussed, cannabis with a high THC content may encourage the release of ghrelin, which might increase appetite. However, it could also have the opposite result. Cannabis has diverse effects on different people, and this includes appetite. Weed can decrease hunger as well as stimulate it. This may be brought on by nausea that comes from consuming excessive doses of cannabis or the anxiety and anxiousness that comes with ingesting THC.

Common Conditions Caused By Excessive Use Of Cannabis

The extended use of cannabis can result in chronic conditions. Although, most of these conditions are very rare.

Another incredibly uncommon illness is acute pancreatitis. It may result in fever, severe nausea, and vomiting. According to a study, some patients who used cannabis to treat their symptoms instead found that their condition got worse each time they used it. The studies, however, are scant and do not show cannabis’s genuine effects.

Frequent nausea and vomiting are symptoms of cannabinoid hyperemesis syndrome. It is believed to be brought on by a breakdown in the communication between the brain and the digestive tract. Chronic cannabis users may try to end their marijuana use permanently to treat their symptoms. Those experiencing problems may also find relief with capsaicin cream.

Not everyone experiences digestive issues from using cannabis for an extended length of time. Factors like genetics, dosage, and type of cannabis come to play.

While there are downsides to cannabis use on the digestive system, there are also advantages. The future of cannabis and the digestive system rests greatly on the amount of research that will be carried out in the coming years. We need more information on the herb’s effects on a person’s appetite and digestion.

CANNABIS FOR YOUR DIGESTIVE SYSTEM, READ ON… 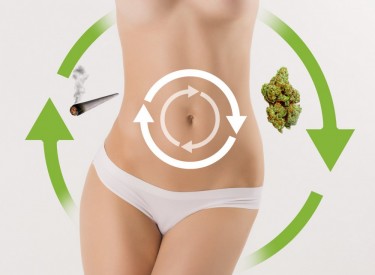 CANNABIS FOR DIGESTION, HOW THE PLANT INTERACTS WITH YOUR STOMACH!

Starbucks union hits major milestone despite ongoing union-busting, this week in the war on workers