Readers Respond to the April 2022 Issue 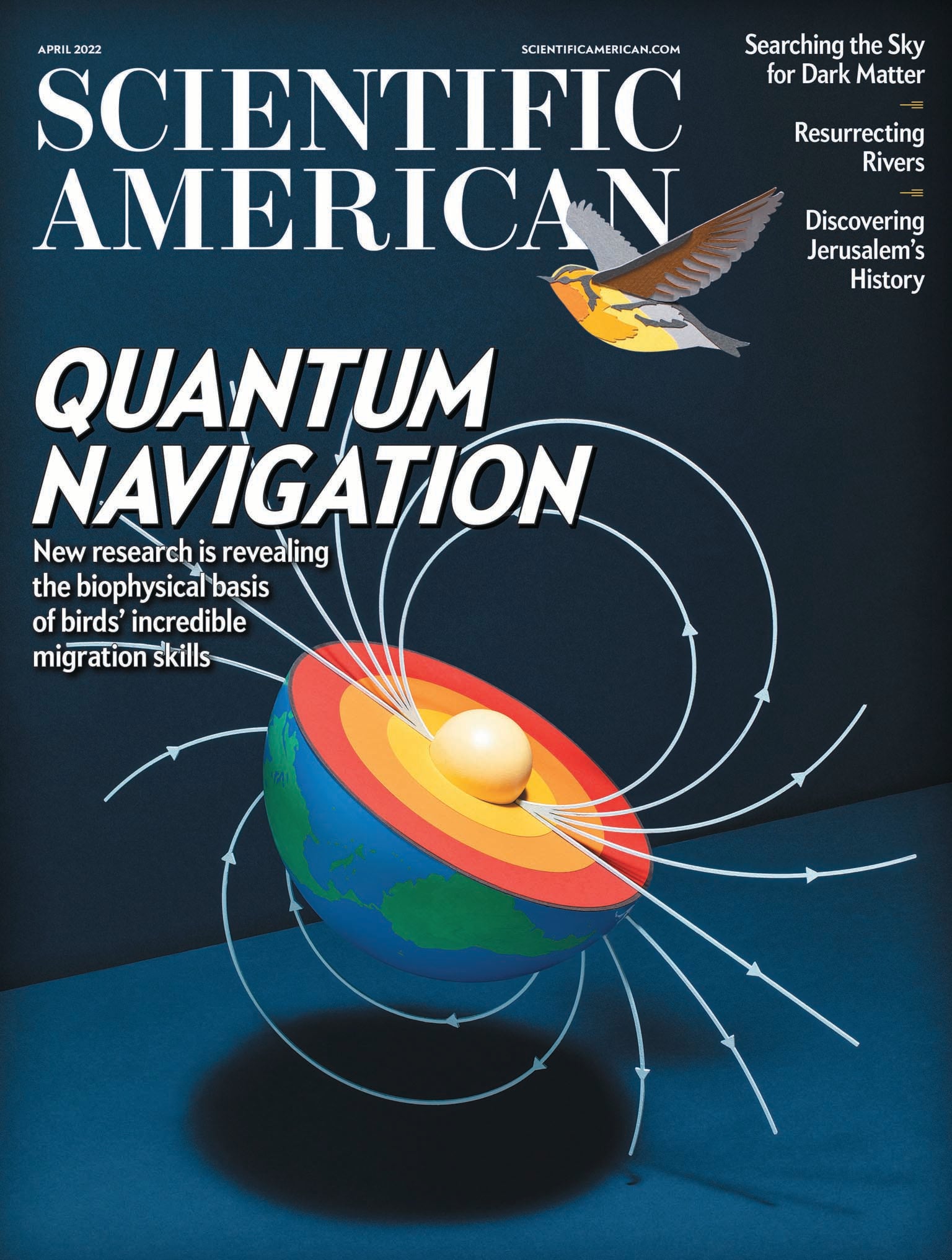 FLIGHT OF THE NAVIGATORS

“The Quantum Nature of Bird Migration,” by Peter J. Hore and Henrik Mouritsen, describes the biophysical underpinnings of how the animals navigate. This article is fascinating. I believe that Earth’s magnetic north pole shifts position every so often. How would this affect the ability of birds to migrate successfully?

Radio-frequency (RF) transmitters are increasingly attached to birds to track their movements. The sizes of transmitters and the methods of attaching them have had unfortunate physical impacts on birds, which are gradually being addressed through design improvements. But in light of the eye-opening findings presented in Hore and Mouritsen’s article, it seems we also need to be concerned about RF fields generated by tracking transmitters and how those fields might impact birds’ supremely delicate natural compass.

THE AUTHORS REPLY: To answer Sverdlik: Earth’s magnetic field does indeed shift, and pole reversals occur from time to time (the last one was almost 800,000 years ago). We know that birds are capable of calibrating their magnetic compass with information from the sun. If they do this every day, it does not matter where the magnetic poles are. No one knows what happens during a reversal. If it took place instantaneously, birds would be none the wiser because their compass is not sensitive to the polarity of the magnetic field. But the reversal typically takes several thousand years, during which time the local magnetic field intensity can be very much smaller than it is today. Perhaps the birds would simply rely on other directional cues until the magnetic field settled down again.

In response to Alexander: Tracking devices usually employ frequencies well beyond 100 megahertz, which are very unlikely to affect the birds’ magnetic compass. Frequencies within the range that can affect their compass could indeed falsify results. Usually the transmitters are active only intermittently and for very short periods, however. Therefore, even if they used the critical frequencies, there might be no significant effect on the birds’ orientation.

I do not read Scientific American for the reviews, but I recognize one that is beautifully written. Omar El Akkad’s review of Emily St. John Mandel’s novel Sea of Tranquility under the heading “Half-Lived Years” [Recommended] is a piece that can stand alone as an essay on our times and the literature emerging from them. He should be commended for it.

“The Threat of Solar Superflares,” by Jonathan O’Callaghan [December 2021], discusses instances within the past 10,000 years in which immense flares from the sun have caused geomagnetic storms on Earth, including the massive 1859 Carrington Event and a far stronger storm around A.D. 775.

It should be noted that at the National Oceanic and Atmospheric Administration’s Space Weather Workshop in April 2014, one of the main topics was about a near miss that actually occurred in July 2012: a large coronal mass ejection was detected passing Earth by the STEREO-A satellite. It was suggested that it could have had a much larger impact than the Carrington Event. The 2012 event missed us by one week.

DON’T SLEEP ON THIS OFFER

In “Nap Like a Genius,” Bret Stetka writes about recent research on Thomas Edison’s practice of jolting himself from the edge of sleep to boost creativity. I tried Edison’s sleep-interruption technique by holding a copy of Scientific American as I started a nap, waiting to reach the N1 stage. When the magazine fell to the floor, I woke with a revelation: “It’s time to renew your subscription.” The true genius appears to lie within your subliminal marketing department.

In “The Long Shadow of Trauma” [January 2022], Diana Kwon describes the history of the stigmatized diagnosis of borderline personality disorder (BPD) and the question of whether it should be recast as a trauma-related condition. As two psychologists who have treated many traumatized and BPD patients and supervised hundreds of psychotherapists in training, we appreciate the clarity and depth of Kwon’s reporting. Not every aspect of this complex topic could possibly be addressed in one article, but there are two points we feel are important to emphasize.

First, one of American clinical psychologist Marsha Linehan’s most brilliant insights about the treatment of BPD is that psychotherapists themselves must receive support and supervision to be effective treatment providers. BPD patients are difficult. Psychotherapists are human. Very often, they, too, have been traumatized and invalidated, and they may retaliate against patients who “invalidate” them by failing to improve in treatment. The hostility toward these patients mentioned in the article is not only the consequence of a difference in the therapist’s theoretical approach; it is a consequence of the therapist’s countertransference left untreated.

Second, a psychiatric diagnosis is based on a model of disease entities causing illness. In the case of viruses, this model is clearly useful. In the case of psychological pain, the entity-based model may be helpful in supporting less blame and shame, and more compassion, from society in general.

For the purpose of effective treatment, however, diagnoses are poor guides. Models based on continua, such as the intensity of the individual’s experienced trauma and invalidation, genetic and temperamental vulnerability, etcetera, may be more accurate and useful. As Peggy Wang, a person who’d been diagnosed with both BPD and complex post-traumatic stress disorder, was quoted as noting in Kwon’s article, “The labeling is not the issue.”

The keep-cool reflective paint described in “Cool Color,” by Sophie Bushwick [Advances; August 2021], looks like a useful product for those of us living in a hot, sunny climate. Bushwick quotes materials scientist Yuan Yang noting that manufacturers of such material will need to figure out “how to make sure that the paint stays white after 30 years of use.” That problem is easily solved by any householder: every five to 10 years, wash the surface and repaint it—voilà!

In “Constructing the World from Inside Out,” by György Buzsáki [June 2022], the opening illustration should have been credited to Stefania Infante, not Islenia Milien.

“Discrimination Is Heartbreaking,” by Jyoti Madhusoodanan [Innovations In: Health Equity; June 2022], incorrectly said that Shivani Patel’s work has focused on tribal communities in rural India for the past two decades. Her work focuses on community health issues across the country.

American democracy on the line