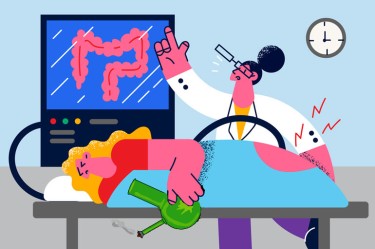 Endoscopies are a type of nonsurgical medical procedure that involves inserting an endoscope into the throat and down into the esophagus.

The tool, known as an endoscope, is used to examine the digestive system with a camera that has been designed into it. Gastroenterologists or other specialists will use this procedure to determine if there are any illnesses that affect the stomach, esophagus, or the upper digestive system. In some cases, patients need to be sedated with anesthesia to perform an endoscopy especially if it’s a high-risk case, or if the patient is pregnant since inserting the scope may irritate the upper area of the gastrointestinal tract. This can cause a gag reflex and major discomfort in some people.

Now, a new study has found that cannabis users may require more anesthesia than usual if they have to undergo an endoscopy.

The study, which was presented during the Digestive Disease Week 2022, involved researchers analyzing 419 adult patients who were about to undergo an endoscopy in Canadian medical centers. The endoscopy was to be performed with conscious sedation wherein the patient and relaxed though partially conscious. All patients were also asked to fill in two surveys, one before the endoscopy regarding their cannabis consumption while the other was after, asking them questions about how aware and comfortable they were during the procedure.


The researchers found that marijuana use was associated with the chances of requiring more anesthesia, such as over 5mg of midazolam, more diphenhydramine, or over 100mcg of fentanyl.

“Patients didn’t have increased awareness or discomfort during procedures, but they did require more drugs,” explains the study’s lead author, Dr. Yasmin Nasser, during a press release by the American Gastroenterological Association.

There have been several other studies proving that cannabis users require more anesthesia during surgical procedures, which is a note of caution for consumers.

One report from 2019, which was published in the Journal of the American Osteopathic Association, found that cannabis users may need as much as twice more the normal dosage. The researchers from Colorado analyzed the medical records belonging to 250 patients who underwent endoscopic procedures after 2012, which is when recreational marijuana was legalized in the state. They found that daily or weekly marijuana consumers needed 220% more propofol, 20% more midazolam, and 14% more fentanyl to get to the ideal sedative state for procedures including colonoscopies.

“Some of the sedative medications have dose-dependent side effects, meaning the higher the dose, the greater likelihood for problems,” said head researcher Mark Twardowski, DO. “That becomes particularly dangerous when suppressed respiratory function is a known side effect,” he added. Twardowski also acknowledged that marijuana has interactions with other drugs. “Cannabis has some metabolic effects we don’t understand and patients need to know that their cannabis use might make other medications less effective. We’re seeing some problematic trends anecdotally, and there is virtually no formal data to provide a sense of scale or suggest any evidence-based protocols,” he says.

The researchers also suggest that patient forms asking about their cannabis use is critical for medical professionals to get the information they need to identify the right patient care protocols. “Determining cannabis use before procedural sedation can be an important tool for planning patient care and assessing both medication needs and possible risks related to increased dosage requirements during endoscopic procedures,” they wrote.

Another preliminary study from 2020 revealed that cannabis users who needed to undergo surgical repair for a broken leg needed almost 60% more opioid painkillers each day as they recovered in the hospital.

“It’s similar to flying a plane. You have a takeoff section, and then you have your cruising section and then your landing. These in anesthesia are induction, maintenance and emergence,” explains Dr. Ian Holmen, resident anesthesiologist at the Colorado Anschutz Medical Campus and the study’s lead author. “We found that it’s not just in the induction phase of anesthesia that you need more anesthesia, but even during that cruising phase you need more inhaled anesthetic.”

Holmen and his team analyzed the medical records of 118 surgery patients who went in for a broken shin bone. Thirty of them admitted to cannabis use, though the frequency and quantity were unknown. Those patients reported more pain after surgery, requiring more opioid painkillers.

They also found that cannabis users who already have existing lung or heart problems can face serious risks while in operation based on the quantity of anesthesia that they need for surgery. “Sevoflurane has a very clear dose-dependent effect on blood pressure,” says Dr. David Dickerson, who sits as vice chairman of the American Society of Anesthesiologists (ASA). “The more sevoflurane you receive in the OR, the more a patient’s blood pressure drops. If you have heart problems or lung problems coming into the OR, it could be dangerous.”

It can be understandable that you feel worried or uncomfortable about sharing your marijuana consumption habits with your health care provider. However, as more states legalize the plant, more doctors are becoming knowledgeable about its use as well as benefits.

Disclosing your cannabis habit to your doctor is extremely important if you are taking prescription medications or may have to undergo endoscopy or any other kind of surgery. Even if your health questionnaire doesn’t ask about it, doing so can make a critical difference in the outcome of your surgery since more sedative use may lead to complications. Last but not least, it’s in your best interest to share your medical history including cannabis consumption.

MARIJUANA USE AND ANESTHESIA, READ MORE.. 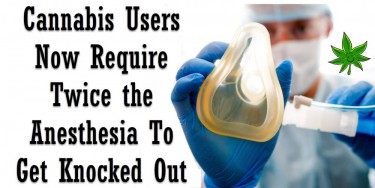 WHY CANNABIS USERS NEED MORE ANESTHESIA THAN OTHERS!

How human-like are the most sophisticated chatbots?