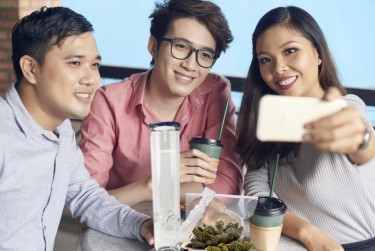 Why Cannabis Social Lounges Need To Be The New Norm

For cannabis to be as culturally and socially accepted as alcohol is, cannabis social lounges need to be the new norm.

Thankfully, we’re starting to see more social consumption lounges sprout up around the country, in places where adult-use has been legal. These social lounges basically provide adults with a safe space where they can partake and indulge in an array of marijuana products, whether it’s smoking or consuming infused goods and beverage. In essence, they’re pretty much the marijuana counterpart of a bar.

These have been around for a long time in the Netherlands, particularly in Amsterdam, which pioneered the concept of a “coffee shop” where one can go in and easily access marijuana products. However, Amsterdam was doing so for many years while in a legal gray area, and the products being served in these coffee shops were not regulated. In the US, the scene is different because only legal marijuana can be served. Things are different in Amsterdam today, but it can be said that the Dutch coffee shops inspired the models we see around the United States, but US counterparts will have to adhere to much stricter rules and regulations.

Having said that, there are numerous benefits for cities that encourage the growth of cannabis social lounges:

Tourism: Cannabis tourists will be drawn to social consumption lounges, and it will no doubt help boost the economy. Most tourists aren’t allowed to smoke cannabis in public nor can they smoke indoors. State regulations prevent this, and while we don’t like seeing people drunk on the street, cannabis is a much safer alternative and it prevents marijuana from being exposed to underage kids on the streets.

Curb the black market: When you make marijuana easily acceptable and accessible to those of age, it will eventually help to kill the black market. Curbing the illicit market is hard enough as it is, and there is no one-size-fits-all solution; there needs to be a multi-pronged approach to doing so, and social lounges are part of the solution. Not only will adults be able to get weed in a dispensary, but they will also have the option of going to these clubs to share a joint after work instead of picking up weed from their dealers. Additionally, state regulations typically prohibit the use of black market and underground marijuana products in these places.

A place of inspiration: Cannabis social lounges can inspire people of all backgrounds in multiple ways. Take, for instance, social events like painting while high, or tasting menus with professional chefs. The possibilities for crafting up a unique experience at a social club is virtually endless. On top of that, people will be inspired to create one-of-a-kind marijuana offerings to attract more visitors and tourists. Even more, once cannabis social lounges are more widespread, brands will be motivated to create innovative products such as beverages and craft cocktails that can be enjoyed particularly as an alternative to alcohol.

Harm reduction: Cannabis clubs and lounges are a fantastic place for beginners to learn the ropes. These places are staffed by experts and seasoned cannabis consumers who can share their knowledge with their peers. In the process, it contributes back to the community by means of harm reduction, ensuring that people have access to those who can guide them with the proper dosing and consumption for their safety.

Fight the stigma: Cannabis lounges are key to breaking down the stigma surrounding cannabis use. A professionally-operated and compliant cannabis social club is proof that consenting adults can be trusted to consume in a safe space legally. Right now, even with most states having legalized marijiuana in one form or another, there is still an uphill battle to fight when it comes to the stigma; many are still against legalization and thousands of people around the country struggle to obtain access to it.

Why We Have So Few Right Now

Compared to cannabis dispensaries and manufacturers, there are so little social lounges around the country. That’s because a social lounge has to jump through numerous regulatory and legal hurdles compared to other cannabis businesses.

Unfortunately, the pandemic didn’t help; there were very few cannabis social lounges to begin with, and many of them had to close because of the COVID-19 pandemic. However, owners and hopeful owners alike are hoping that things change in the near future. Colorado and California have paved the way for other states because they pioneered normalizing marijuana social lounges long ago but it’s only now that other states such as Illinois, Nevada, New York, and New Jersey are beginning to embrace the benefits that social lounges can bring.

While it’s fantastic news that we have so many cannabis dispensaries around us today, there’s no denying the fact that we still lack the appropriate venues to consume. Brick and mortar businesses, even in other industries, are still picking up the pieces left by the pandemic. Furthermore, the cannabis industry needs to develop new retail models – such as lounges and clubs, not relying on the success of dispensaries alone as retail models – to survive in the future.

But with the help of progressive state regulations and enthusiastic cannabis entrepreneurs, cannabis consumption lounges may hopefully become the norm in the near future. Those interested to open a lounge should always stay ahead with current state laws since the regulations for public consumption will vary from one state to another.