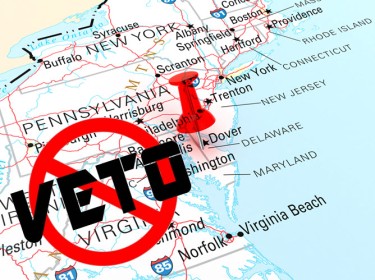 On the 23rd of May 2022, the governor of Delaware declared that he had rejected a bill from the legislature to legalize cannabis.

This wasn’t surprising as Gov. John Carney has always been clear on his stance against cannabis even when acceptance is at an all-time high within his party. However, proponents were nursing the hope that he would at least sanction simple regulations to allow recreational use and possession of cannabis.

During a press statement, the governor affirmed that he is in support of people having access to cannabis for medical use. Neither is he against the private use of cannabis in small quantities and he strongly believes people shouldn’t be jailed solely for cannabis possession. But, he believes the present policies still serve Delaware well and the state shouldn’t move beyond that.

The governor asserted that he doesn’t think expanding and promoting the recreational use of cannabis will be what’s best for the state, particularly for young adults. He believes questions surrounding the economic impacts and long-term health effects of recreational cannabis use including concerns of law enforcement are still unresolved.

Looking at the situation of things, there’s still the possibility of the governor’s veto being overridden. The HB 371 bill which was vetoed by the governor was endorsed by Rep. Ed Osienski and at the moment has earned support from over three-fifths of lawmakers in both chambers. This level of support is more than enough to overrule the decision made by the governor.

According to the governor, he is respectful of the role of the Legislative Branch in the situation and he’s of the understanding that some have a contrary opinion to his. But, he affirmed his position about cannabis legalization in the state is quite clear even before he became the governor.

Osienski also underwrote a corresponding bill to establish the regulations for the adult-use marijuana market. The bill has also passed through the committee together with HB 371 but the bill was slightly defeated by a single vote. Osienski executed a procedural maneuver that could see the bill pass through the committee once again for another vote. If that happens, the possibility of the bill passing is high considering a supporter was absent from the previous roll call.

In a response to the veto, Osienski affirmed that over 60% of Delawareans fully support the legalization of cannabis for recreational adult use. He added that early in May, 60% of the General Assembly supported and voted against the prohibition of cannabis possession for personal use.

He went on to add that despite these supports, the governor decided to push aside the will of Delawareans by vetoing HB 371. Osienski said that he’s very disappointed in the governor’s decision, particularly given that the bill could have been enacted into law without his signature. This would have protected the will of the legislators and residents and the governor’s opposition. Osienski then concluded that he will have to review the situation and come up with the next line of action.

According to Osienski, vetoing the bill won’t stop the citizens from buying and consuming cannabis. The veto will only be criminalizing the action. He believes enough examples have been set like in New Jersey how this new industry can generate revenue and create jobs. In New Jersey, cannabis sales hit close to $2 million on the first day of legalization. Until such a market has been established in Delaware, citizens will go on to buy cannabis illegally either through the black market or from New Jersey.

Osienski made a smart decision to split up the measures given early proposals that combined both parts didn’t gain the much-needed support in the House.  Since the simple possession bill was not concerned with raising revenue, it required just a simple majority but was eventually able to gain major support from both chambers.

The governor in his initial comments about the legalization affirmed that cannabis use shouldn’t be criminalized but he still has several concerns with changes in policies. He, however, didn’t comment as to where or not he would sign the bill.

One of the Marijuana Policy Project’s senior policy analysts, Olivia Naugle, in a press release defined the veto as a serious injustice.  She asserted that the crucial legislation would help to significantly reduce police interactions, citations and searches fit cannabis possession within the state. She continued by citing that the reality of cannabis law enforcement is quite unusual and Black Delawareans bear the brunt of it. They are disproportionately searched and sanctioned for cannabis possession or the smell of it.

Here’s what the HB 371 hopes to achieve;

The bill would revise the statutes in the state by removing penalties attributed to the possession of one ounce of cannabis by adults above the age of 21 years.

The bill would also create a new section stating that adults, 21 years and above could share a maximum of one ounce of marijuana without remuneration. The section explains that cannabis could not be given away as a contemporary reciprocal transition.

It should be noted that Pete Schwartzkopf, was the sole democrat Delaware House Speaker that voted against the initial extensive legislation bill. However, he has motions that he might be prompted to support a bill that offers commerce regulatory infrastructure if the changer supports legalizing sharing and possession. Even though he voted against the bill early last month, he voted for the sales bill late last month.

Currently, possession of cannabis to a maximum of one ounce has been decriminalized within the state. Although, it is punishable by a fine with no threat of prison time using the law which was passed in 2015. In 2019, the governor also signed a bill that broadened the policy to also apply to individuals below the age of 21 years. Nonetheless, they will face severe consequences for repeat offenses.

The governor has always been clear on his stance on cannabis legalization. He believes cannabis to be a gateway drug to other hard drugs which is why he’s against its legalization. He asserted that a lot of money, time, and effort has been spent to stop people from using marijuana and, now there’s a sudden turn around it is ok to smoke it now. He believes it is not a good idea. Mentioning his evaluation of other states, he asserts that it doesn’t look like a positive thing to do enacting cannabis organization. But is it the worst thing in the world? Of course not, he doesn’t believe that.

What is Cannabis-Assisted Psychotherapy and What are the Benefits of This New Trend?